We’re given a binary with a description “I went to the hardware store yesterday and bought a new lock, for some reason it came on a flash drive. Can you figure out how to unlock it? I really need to get into my apartment.” When running the binary, we see a lock with 5 pins. We need to solve each pin to unlock the lock and get the flag. The pins are unlocked in order 3 - 1 - 5 - 2 - 4, which can be determined by trial-and-error.

Dropping the binary into hopper (a disassembler), we can see the following pseudocode generated for pin 3:

The pseudocode for pin 1 is shown below:

I got stuck here for a while, mainly because I’m not very experienced with reverse engineering linux binaries. I could see that our answer needed to be some number between 0 and 256, and I used gdb for some tracing, but overall I couldn’t directly answer this problem. I figured I could try another route. I came across @leonjza’s Frida-boot workshop to instrument linux binaries. Since I was already familiar with using Frida to instrument mobile applications, I figured it would not be too much of a stretch to learn how to use Frida for linux binary instrumentation.

The workshop was highly informative and I’d highly recommend giving it a watch. I learnt about instrumenting the binary by hooking it’s functions, similarly to how you’d do it for mobile apps. However, I couldn’t directly apply the knowledge to the above problem since do_pin1() did not take arguments. Moreover, we needed to solve the actual challenge and not just modify a return value to get through to the next level. The workshop gave me a kick to do some extra research, and I found that you could use Frida to directly modify in-memory code to suit your needs. This meant I could patch in my own loop to brute-force the code, even if the function did not have arguments.

To brute-force the answer, we to submit numbers between 0 and 256 and check if we get the answer. Consider the following steps: 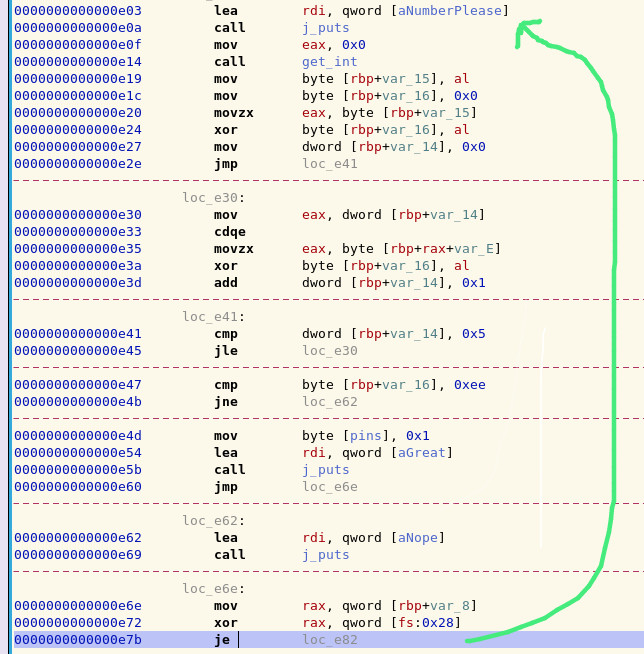 The resulting Frida script is as follows:

This gives us the following output from Frida:

Next up was pin 5, which was a lot easier to solve than the previous pin. The pseudocode is shown below:

Here we have a hardcoded seed, so we just need to see what the outcome of rand is. Since we’re using Frida, we can hook rand() and then replace our input with the outcome. Since the value is always going to be the same, I nopped out the call to get_int and replaced it with hardcoded value which I got after running the program with the rand() hook. When solving the actual challange binary, all we need is the number generated according to the seed.

Pin 2 was similar to pin 5 in that we needed to call rand() with a specific seed. The difference was that the seed was the return from time(), which meant the answer was different each time we ran the binary. The pseudocode for pin 2 is below:

To solve this pin, I placed a code hook after srand was set with the time. Once attached, I called rand() directly and reseeded srand with the original time seed, so that when we go back to solve the pin, the random number will be the same as the one that we caught.

When calling pin 2 with the above script, Frida prints the following:

When solving the actual challenge binary to get the flag, you’d need to run the binary locally and manually modify the seed in the script to be the time as given by the challenge binary.

The pseudocode for pin 4 is below:

There’s definitely some weird looking things in here. After spending some time poking around, I found that var_38 depended on the random numbers generated from pin 2 and was always around the range of 0x40 to 0x4a. I knew that we need to submit some set of characters (a sentence), and that we looped over it for some result to be 0x123. Other than that, I wasn’t too sure what was going on. I patched in another loop and tried random sentences, similar to what I did with pin 1, but that did not work.

After submitting a random string to run the script, this was the output from frida with the above script attached:

Calling pin 4 again and submitting the found answer at6v solves the pin, and the challenge:

This challenge definitely took much longer than I expected since I detoured into learning more about Frida, but I’m glad I did since it’s quite a fun tool to use. Big thanks to @leonjza for the great frida workshop! I would highly recommend checking it out if you interested to get your hands dirty with Frida.

Overall I found this challenge to be a bit tough, mostly due to pins 1 and 4. I thought this challenge would be straight forward since it was a beginner challenge, but it probably would have been better to learn some C and or practice easier challenges before taking on this one. I’ve left open the comments in case there is anything anyone wants to raise or have suggestions on how I could have done things differently. Regardless, big thanks to the author of this challenge! I’ve learnt a lot. :)

We’re given an Android app with the hint “An app that gets the flag for you! What more could you possibly want?”. The app has 4 main buttons, and after each button press we get a “Response Code: 20...