The first challenge was a sanity-check challenge, which is basically a way to make sure your basic tooling is setup correctly. This was the smart contract given:

The only step is that you need to call the welcome() function to get the flag. The easiest way to do this is to load up this contract on remix and use the Load contract at address function under the Deploy & Run Transactions tab. This contract was hosted on the Rinkeby network, so you would need to switch Metamask to this network before you load the contract. Once loaded, you should see something like the following: 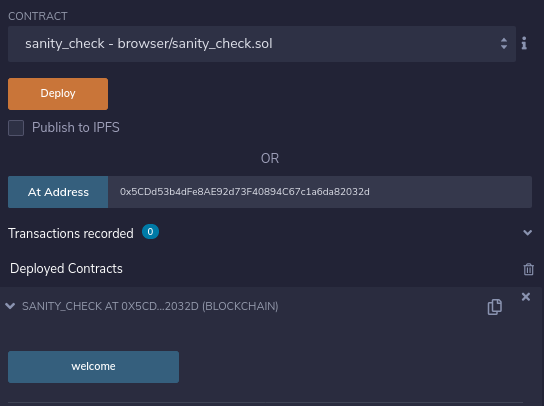 Clicking on the welcome() function returns the flag. Alternatively, you could write your own contract to interact with the deployed contract, as follows:

Deploy the contract on Rinkeby and call the getflag() to get the flag. Since the function fetches a stored string, another alternative would be to decompile the bytecode and just read the flag directly.

To get the flag, we need to call gib_flag() with the correct parameters. The first argument needs to satisfy (arg1 ^ 0x70) == 20, which is the same as saying arg1 = hex(20)^0x70. The second argument was some string that decrypts to “offshift ftw”. I copied over the decrypt() function on a separate contract and poked around to see what what the function was doing. I noticed that the decrypt function rotated the letters by 10 (i.e. ROT10), so it means we needed to apply ROT16 to “offshift ftw”, which is “evvixyvj vjm”. The last argument was needed some positive unsigned integer that when incremented returns a number less than 1. Since uint is an alias for uint256, it means that 2**256 will overflow. This means arg3 should be 2**256-1 to pass through.

I wrote the following contract to solve the crack_me:

Notice that my crack_me contract only has code stubs - that’s because there were some compilation issues with the code given by the CTF host. For one, we’d need to drop the flag state variable and modify the return types to get everything to check out. I figured it would be easier to drop all the code, and fix the last error which was to change the return type of gib_flag from uint[] to uint[] memory. For some reason, the remix IDE kept freezing up with the returned uint array. However, I happened to have burp suite open from a previous challange, and I saw the response there:

To get the flag, we need at least 2 consecutive wins and then call done(). A transaction between several contracts need to all happen in the same block, so we can copy the guess and call bet() from another contract. I wrote the following code to do this:

The function allonred() calculates the same number as the casino contract, ensuring that we’ll win each time. My tx’s all went through, but for some reason my consecutiveWins weren’t being counted. I tried triple checked my code and redeployed a few times but got the same result.

Since I wasn’t interacting with a verified contract on etherscan, I decided to have a look at the contract bytecode. After looking around, I saw that bet() wasn’t using msg.sender, but rather tx.origin, which is the EOA (externally owned account) associated to any smart contract call:

In this challenge we need to provide a public key and a bot will return an encrypted flag for us to decrypt with the corresponding private key. In this way, we can’t snoop around in the contract storage or event logs to find the flag. First, I used this site to generate a public/private key pair for me. I then needed to get 600 UNI tokens before I could call the grant_membership() function. (Notice that UNI has 18 decimal places, so 6e20 is 600e18, i.e. 600 tokens). I got some rinkeby ETH from the authenticated faucet and bought some UNI on the Rinkeby Uniswap. I noticed that other users were using FlashSwaps to get their 600 UNI for the transaction, but I already had my UNI so I carried on. (If you’d like to see a flashswap demonstration, let me know in the comments!) After calling grant_membership() the admin/bot sent the transaction with the encrypted flag in the event logs.

At this point I wasn’t really sure which tool to use to decrypt the flag. After a few hours of digging and poking around I came across https://github.com/ecies/py which could be used to decrypt my flag. Loading the private key and running the following in eciespy gives us the flag:

A big thanks to the team behind this CTF! I really enjoyed these, and it’s cool to see that more CTFs are incoporating blockchain-style challenges :)

hello This was a sanity check to ensure that your setup is working. For each challenge, we’re given our own private blockchain instance where the setup contracts were deployed and for us to solve....